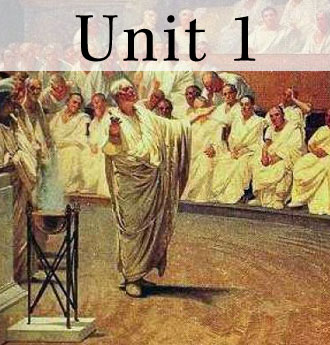 Unit 1: What Are the Philosophical and Historical Foundations of the American Political System?

The people who led the American Revolution, which separated the American colonies from Great Britain, and who created the Constitution, which established the government we have today, were making a fresh beginning. However, they also were heirs to philosophical and historical traditions as old as Western civilization.

The Founders were well read. "I cannot live without books," Thomas Jefferson once told John Adams. Jefferson's library of approximately 6,500 volumes formed the core collection of the Library of Congress. Adams reputedly read forty-three books during the year he turned eighty-one years old. These Americans were familiar with the history, philosophy, and literature of the ancient world as well as with the ideas of their own time. They also studied English history and law, from which their constitutional traditions derived. And religion was an important part of the Founders' education. They knew the Bible and its teachings.

Moreover, the knowledge that these people possessed was not limited to what they read in books. In creating the new nation, they drew on their experiences. Many of the Constitution's Framers had fought in the American Revolution and had served in colonial government before America won its independence. They also had experience governing the newly independent states. They used this knowledge and experience when they wrote the Constitution. An understanding of what they learned will help you understand why they wrote the Constitution as they did and why we have the kind of government we have today.

This unit provides an overview of some important philosophical ideas and historical events that influenced the writing of the Constitution and the Bill of Rights. It is particularly important to understand the content of this unit because it provides a frame of reference and a basis for understanding the other units in this text. You will appreciate why our history as a people has been a great adventure in ideas and in trying to make these ideas a reality.