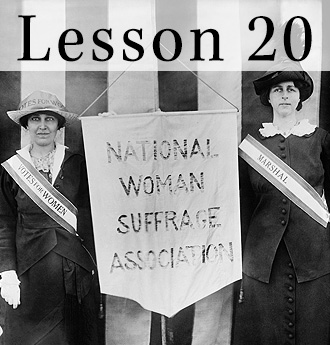 Lesson 20: How Has the Right to Vote Been Expanded since the Adoption of the Constitution?

During the colonial period and the early years of the nation, suffrage—the right to vote—was generally restricted to white men who owned property. The majority of adult white men met this requirement, especially in rural areas. Other people—women, Native Americans, African Americans, indentured servants, and members of certain religious groups—usually were denied the right to vote. This lesson examines how the right to vote has been extended since 1787. The expansion of the franchise to include almost all citizens eighteen years of age or older represents one of the great themes in American history, in some respects the most important theme.